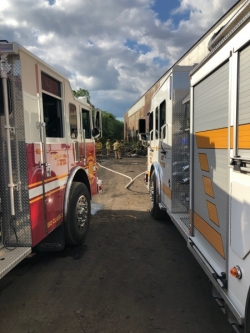 Fair Oaks VFD was requested by Ambridge Station 71 to assist with a commercial structure fire in the Port of Ambridge Industrial Park along with Crescent station 129 for the RIT assignment. Upon arriv...
Read more »
Mutual Aid Landing Zone
Mon. Oct 29th 2018 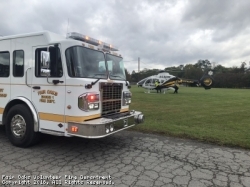 Station 308 was dispatched to assist Ambridge Fire Department to set up a landing zone for a vehicle accident.
Jacob Mosholder Passes Fire School
Sat. Oct 27th 2018
We would like to congratulate Jacob Mosholder for passing all 4 modules of fire school and earning his certification as an interior firefighter!
About Us

Originally part of Pitt Township and the Depreciation Lands, reserved for Revolutionary War veterans, it was named after Jonathan Leet, a surveyor who laid out the town of Beaver Falls.

Leet's brother, Daniel, also was a surveyor who bought several large lots in the area. Daniel Leet served on George Washington's staff during the Revolutionary War.

Gen. Alexander Hays, a Pittsburgher who named the Mexican War streets on the present-day North Side after that conflict, named his Civil War horse "Leet" after the family. One of the Leet descendants, David Shields, served as Hays' personal aide during the Civil War. After Hays died at the Battle of the Wilderness, a family friend gave his wife, Annie, a home and five acres on Big Sewickley Creek, which she named "Fair Oaks" after the battle in which her husband was promoted.

The original boundaries of the township included what are now Edgeworth, Leetsdale and part of Sewickley Heights.

After the Civil War, the residents decided to file a petition to form a separate municipality because they were upset at the level of services they received from Sewickley Township. The votes were counted at the home of Justice of the Peace John Way Jr, grandson of one of original property owners in the area, Caleb Way, a Quaker.

The original volunteer fire department was organized July 12, 1905 with fifty members through February, 1912.

Charles W. McNamee was the first Chief. He held this office during the year 1908, prior to moving to Ambridge. Listed as honorary and contributing members at that time were A. J. Minke, Claud Davis and W. R. Motz.

No activities were recorded  from 1912 until October 1915 when there was a fire in a dwelling on Mound Street. The call was responded to by the Ambridge Fire Department. Immediately after that incident a call was issued for the formation of a local fire department. At that meeting there was an overflow crowd and the Fair Oaks Volunteer Fire Department was formed.

The first equipment inherited by the reorganized department was a hand-drawn hose cart which was located in a frame shed on Ledge Street near the Fair Oaks School. Practice sessions were held every Saturday out Ambridge Avenue, which was a dirt road at the time, and was a test of strength and energy.

Land on Beech Street was purchased from the Fair Oaks Land Company and the shed was moved there during the summer of 1916.

A few years later the department moved the shed and constructed a fire station consisting of a front room a double garage. A large back room was added in later years.

The first truck purchased was an American LaFrance equipped Ford. A fully equipped Ambulance was also purchased. The second truck, truck #3, was a Master Firefighter equipped Chevrolet. Free ambulance service was provided for many years.

Copyright © 2006-2020. YourFirstDue Inc. All Rights Reserved. Designated trademarks and brands are the property of their respective owners. Content on this web site is supplied by Fair Oaks Volunteer Fire Department. YourFirstDue Inc. cannot be held responsible or liable for any content, text, pictures, or any other media found on this web site. Maintained by the members and staff of Fair Oaks Volunteer Fire Department.
Management Login
Powered by